With creative like “My First Chatime…was in a back alley in Taiwan”, the stories are just what you’d expect – hilarious, bold and dubious enough to receive applause from fans and social media tributes from Australian celebrities.

Developed by Chatime’s newly formed in-house creative team and led by creative director Beau Annable, the campaign forms part of a new customer recruitment strategy to drive awareness and trial amongst a broader customer base.

Annable said: “Our objective was to stay true to our brand identity with a witty and gently provocative campaign designed to get our customers talking.

“After all, no-one forgets their first time.” 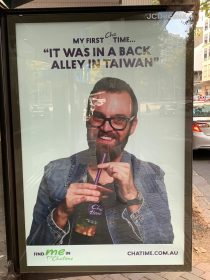 Customers are embracing the playfulness and responding on social media by tagging their first-time partners and sharing stories, while local personalities Benjamin Law and Larry Emdur have both given the campaign a shout out on their Instagram feeds.

‘My First Chatime’ is a national ATL campaign currently live on a national partnership with Val Morgan, social media, supported by national radio and across nation-wide prime billboards, street furniture and transit advertising across Australia. 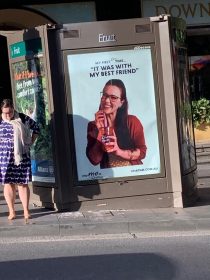 The campaign is supported by the offer “Get 50 per cent off your first Chatime” which is for customers new to the Chatime Loyal-Tea App.