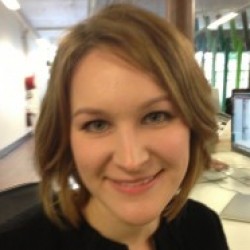 
Inspiration can be found in the strangest of places, even in the bowels of rejection. Here 2014 AWARD School grad Kate Allan reflects on her time at the creative camp.

The first piece of copy that I ever had rejected was an online daily deal description for barefoot lawn bowls.

It read: “Hustle Grandma off the green! Wrest the ball from Pop’s arthritic clutches! For too long geriatrics have dominated the game of lawn bowls. It’s time for them to make a cup of tea and take the weight off their hip replacements.”

I was told to tone it down and be less offensive.

In that case it was probably for the best, particularly given the average age of our customers and the fact that monitoring social media comments was part of my job description.

But at AWARD School, you’re never told to tone things down. And only in extreme cases are you told to be less offensive.

Which is lucky because when you’re pumping out 40 or 50 ideas a week, you quickly lose your filter. It’s the only way to get past the first thoughts, cheap laughs and genius ideas that don’t make sense to anyone but you.

In a professional setting, no creative director is going to calmly and kindly explain to you why a campaign starring Karl Marx, Napoleon and Marie Antoinette is probably not the best way to sell speakers.

No client is going to sit through six consecutive dick jokes without storming out of the room.

But at AWARD School there are no boundaries, no budgets and so many bad ideas being thrown around that there really is no judgment.

In one lecture someone asked, “Is it ok if my idea isn’t strictly legal?”

I think the response was something along the lines of, “Are you kidding? It’s encouraged!”

You like puns? At AWARD School, you can write all the puns you want. Just be prepared to watch them all get ripped off the wall. But that’s ok – it just makes room for more puns!

Sometimes you’ll stumble across a good pun – one that’s funny, surprising, original and all the other things a good ad is supposed to be – but they’re not called puns. They’re called “a play on words”.

I learned a lot from my tutors at Clemenger and The Hallway. Like that it’s ok to advertise Google Drive by getting the Backstreet Boys back together for a reunion concert – you just need to have a really good reason for doing it. (I didn’t.)

And that there’s beauty, or at least necessity, in rejection.

Each week the majority of my ideas ended up in a pile on the floor. The ideas left over were the ones I had to keep working on.

At no point was an idea deemed good enough the first time I presented it. Instead my tutors said, “Keep going”, “Try to push it further”, or my favourite, “This is good. Can you beat it?”

But if they had let me settle for my first, second or fiftieth idea, I wouldn’t have come up with the ones I’m really proud of.

I also learned a lot from my fellow students. Like that the best ideas come from a combination of caffeine pills, red wine and 3am.

And that people really do bond through trauma.

There was a brief, calm interlude between the day I submitted my final portfolio and graduation night. I used the time to reacquaint myself with friends and family and catch up on 12 weeks worth of sleep.