Australia’s media agency market continues to be hobbled by lower business confidence ahead of the federal election, reporting its sixth consecutive month of lower demand in March with total bookings back 4.7 per cent on an underlying basis to $583.6 million from last year’s record high.

The level of business caution is highlighted by the fact that three quarters of all SMI (standard media index) product categories reported lower demand in March, with media investment from key categories such as food/produce/dairy back 23 per cent from March last year, retail ad spend is down 12 per cent and ad spend from the largest category of automotive brand is back 7.7 per cent.

The lower demand in the month of March has ensured the decline in media investment for the March quarter is now -4.2 per cent, which is the largest SMI has tracked since 2009 when the market was hit by a downturn in confidence during the global financial crisis.

SMI AU/NZ MD Jane Ractliffe said it was now unlikely the market will start to pick up until well after the federal election.

She said: “We already know this year’s April data has been negatively impacted by the extended Easter and ANZAC Day break in April this year compared to the smaller timing impact in April last year when Easter started at the end of March.

“So the downturn in media investment is not going to start to pick up until after the election when hopefully the new Government will be able to restore business confidence and therefore inspire businesses to start reinvesting in advertising.

“The good news for major media is that SMI has always seen large upticks in advertising expenditure following periods of lower growth…the only question is when that growth will start to kick in.” 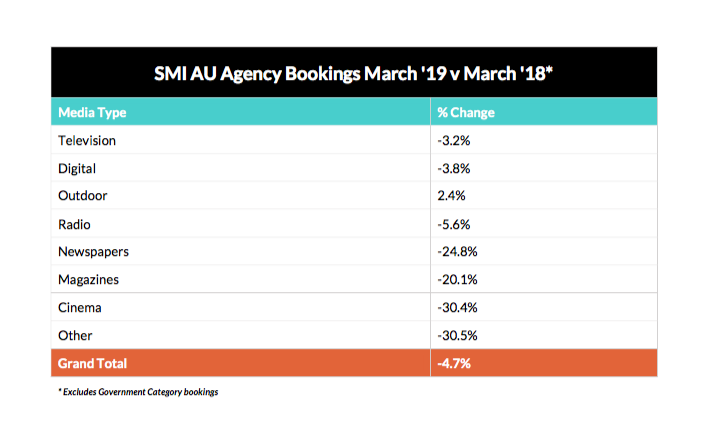 While March ad spend is back significantly, it should be remembered that this time last year the market was soaring due to large increases in ad spend by the domestic banks and other related financial categories due to the start of the financial services Royal Commission. The market was also buoyed by SA’s state election in March 2018.

As a result, the only major media reporting higher bookings this month is outdoor, where total bookings have lifted 2.4 per cent year-on-year.

From a category perspective, the one bright spot in March came from the political parties/industry assoc/unions category with those groups more than doubling their ad spend ahead of the election to $12 million (although this excludes bookings for the UAP).

And in terms of data development, SMI has this month launched the first static v digital outdoor ad spend data in NZ, enabling SMI’s subscribers to track the proportion of outdoor digital spending for all NZ outdoor sectors and product categories.