The annual Public Relations Institute of Australia’s (PRIA) consulting sector benchmark has revealed that most firms predict strong growth in 2014.

According to the survey – which included 48 consultancies nationally – PR consultancy activities grew an average of 2% in 2014. One third reported average annual revenue growth of 19%.

The study, which has run for 14 consecutive years, is based on submissions of detailed financial and business operations information from PRIA Registered Consultancies across all size categories.  It captures data from all States and Territories. The survey is a paid member program and is independently delivered by Galaxy Research. 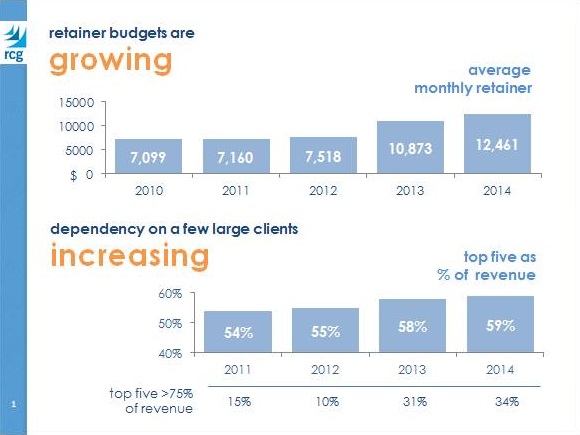 73% of consultancies submitting data this year also participated last year.  This enabled year-on-year trends to be tracked and tested with a high degree of confidence. “Public relations consultancies are investing actively in their future,” according to Adam Benson, national chair of the PRIA Registered Consultancies Group (RCG).

“More consultancies plan to hire staff this year than last year, with hiring intentions strong at every level.  Investments in digital services are also high on the agenda.  42% are planning a significant expansion of their digital offering, while 40% already have dedicated digital services staff in place.

“Average monthly client retainers rose 15% and are now approaching $12,500. However, the study reports a growing dependency on fewer, larger clients in many consultancies.  This concentration of revenue sources increases long-term structural risk in the industry.

“Most business owners and operators are bullish about 2015. 83% predict revenue growth of 14% with smaller consultancies targeting growth of 35% or more. We’ve not seen targets this high since the GFC,” Benson explained.

While Australian staff costs are on par with Asia and Europe, operational overheads in Australia run at 26% on average, almost 6% more than international counterparts.

At the PRIA RCG conference held last Friday in Sydney, PR consultancies were advised to review long-standing supplier relationships. A 39% decline in the price of professional indemnity insurance premiums over the last three years was cited as an example of savings which can be made.  Above average incentives currently available for commercial leases in Sydney, Perth and Brisbane were also highlighted.

The largest client sectors continue to be IT&T followed by Health/Community, Professional Services and Financial Services.

State Government and Utilities/Infrastructure sectors reported the strongest rise in spending; up 5% and 10% cent respectively.  Energy/Natural Resources reported the largest fall; down 8% over last year.

The conference was also told that staff turnover  – after two years of record stability – was returning to pre-GFC levels.  Average turnover was 25% last year.