The first monthly Australian Podcast Ranker was launched today at the national Radio Alive conference in Brisbane, offering the first look at Australia’s top 100 most downloaded and listened to podcasts in September 2019.

These podcasts accounted for 10 million downloads in Australia during the four week reporting period.

The first ranker lists the most popular podcasts across the launch group of publishers that can be both heard in Australia and into which advertising can be sold in Australia. 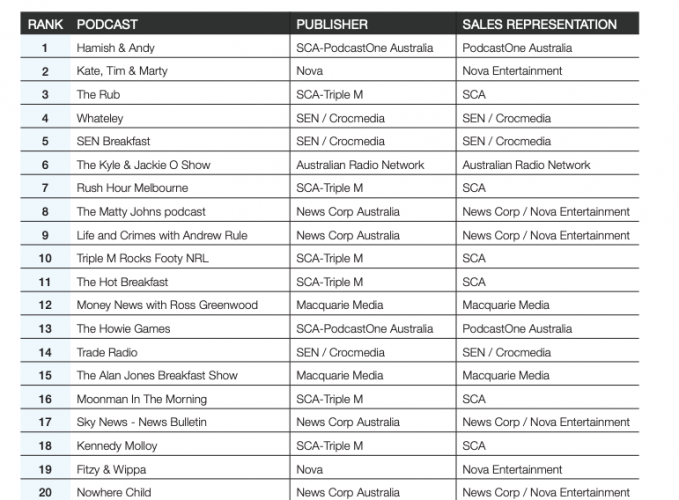 A number of additional publishers, including the ABC, will join the ranker in the next couple of months, and all podcast producers with Australian and international content are invited to participate.

The ranker is compliant with IAB Tech Lab’s version 2.0 podcast measurement guidelines and will be independently audited. “

Commercial Radio Australia CEO Joan Warner said: “We’re excited to work with current and future partners across the podcast sector and with Triton Digital to create a reliable, agreed and regular reporting tool for the podcast industry.

“One of the main objectives of the Australian Podcast Ranker is to increase awareness for consumers and therefore grow podcast consumption, while also creating a framework and guide to assist advertisers to understand opportunities within the podcasting space.

“This work was initiated by the radio industry because of the significant investment made by radio broadcasters in the podcast space, not only into catch-up radio podcasts but into original content outside of the radio offering.

“Radio is one part of podcasting and now that we are up and running, we extend the invitation to all podcast publishers to join us and help shape this work and grow the sector into the future. As the list of participating publishers expands each month, we are confident the value to advertisers of being able to access a credible, independent ranker will be clear.”

The ranker will develop over time to include specific data on publisher and program performance. Up until this development, there has been no collective podcast ranking chart published regularly that shows Australian consumption, making it challenging for advertisers to understand performance across publishers and podcasts.

OMG head of partnerships, outdoor and audio, Jo Dick said: “This is a major initiative for podcasting in this country. I fully support this work as I see it as a first step to allowing advertisers to have confidence in an agreed reporting approach around this new area of investment. I look forward to continuing to develop this tool in collaboration with the foundation and new members of the group in the coming months.”

News Corp Australasia’s executive chairman Michael Miller said: “News Corp Australia is pleased to be a foundation partner with Commercial Radio Australia and many fellow podcast publishers in the launch of a consistent and overarching ranker to grow podcasting in this country.

“As one of Australia’s largest podcast producers at the forefront of driving new podcasting content, we understand the importance of taking part in an initiative that will increase consumer awareness and drive more revenue into the space.”

ABC MD David Anderson said: “The ABC has confirmed our future involvement in the industry podcast ranker, which we believe will provide clarity to an industry which is in a period of growth and development.

“The ABC is a major podcast creator and has been for many years. We believe ABC being included in the ranker will contextualise the space overall and provide good insights for our stakeholders into ABC’s work in this area. We are pleased to work once again with CRA on a project to enhance the audio space.”

Commercial radio broadcasters established the Podcast Committee, including the ABC and SBS, in late 2018 and sought agency involvement and advice, to develop and promote podcasting in Australia.

Triton Digital president of market development John Rosso said: “We are thrilled to have been appointed as the provider of measuring and reporting services for the Australian Podcast Ranker.

“We have been working closely with CRA and the publishers involved in the group to ensure that the ranker is compliant with IAB Tech Lab’s podcast measurement guidelines and best positioned to accurately report on the podcasting space in Australia.

“We look forward to being part of the continued and collaborative development of the ranker.”

The GfK Australian Share of Audio research released today shows that time spent listening to podcasts has doubled over the previous year, and has overtaken owned music for the first time, accounting for 7.3 per cent of total daily listening. The first ranker is attached and can be found online here.