Advertise with us
Posted 7 December, 2018


Southern Cross Austereo’s Hit Network has revealed its show and hosting line-up for next year, with Ash London to continue in her breakfast hosting role on 2DayFM.

After filling in for the last few months for Em Rusciano, London will formally join 2DayFM breakfast with Grant Denyer and Ed Kavalee in 2019.

B&T reported back in May that London was tipped to replace Rusciano amid all the drama that unfolded around the breakfast show that month (which you can read about here, here and here).

London will also continue to host her nightly national music show, Ash London Live, on weeknights from 6:30pm to 8pm.

The Hit Network’s will also continue with its double-barrell drive line-up of Carrie & Tommy from 3pm to 4:30pm and Hughesy & Kate from 4:30pm to 6:30pm.

Danny Lakey, new to The Hit Network in 2018 with his national overnight show, will host late nights from 8pm to 11pm in 2019, and Those Two Girls will return to the early morning breakfast slot from 5am to 6am.

Collective Noun is moving to a slightly later time slot, from 11pm to 1am, while mid-dawns will be announced in the new year. 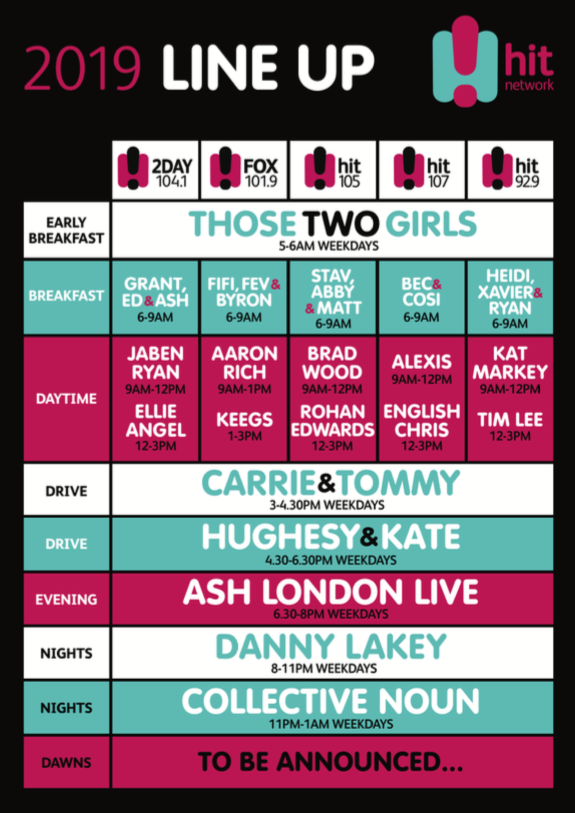 Gemma Fordham, head of the Hit Network, said: “We are so thrilled Ash has agreed to join our 2DayFM breakfast team full-time next year. She is the real deal, connects authentically with audiences and brings a fun, fresh and frank take on the day.

“The chemistry she has with Grant and Ed will only continue to flourish, and we are excited about what is ahead for them.

“2DayFM breakfast is committed to playing more music when you wake up, because we know that’s what our audience wants, and that’s the 2DayFM difference.”

“In all day parts, the Hit Network has never been stronger and continues to grow with the best of the best leading our shows across the country.

“Audiences love our line-up of talent and our ever-evolving music strategy that sets us apart from the pack.