the American Chamber Of Commerce in Australia (AmCham) has revealed a major rebrand, the first to take place in more than half a century.

The rebrand aims to advance the reputation of AmCham and reframe perceptions of the brand in the eyes of its 1000 members and the broader Australian business community.

The new logo reflects both Australia and America’s national flags, and continues to incorporate red, white, and blue, and feature the five-pointed star common to both.

Niels Marquardt, CEO of American Chamber of Commerce in Australia, said it was integral to rejuvenate the brand and showcase how AmCham provides access to opportunities that build foundations of stronger US and Australian commercial partnerships for members.

Following thorough research, Dominic Walsh, managing director of Landor Associates Sydney, the agency responsible for the new brand positioning and identity, said his team realised AmCham needed to drive their leadership position and distinguish themselves as the hub for connections and relationships that provide sustained commercial outcomes for its members. 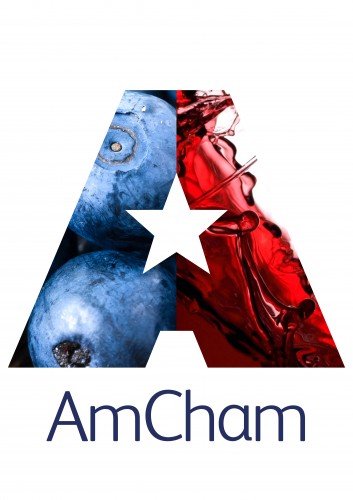 “Since launching in 1961 AmCham has grown into the largest international business organisation in Australia, offering over 200 events and programs each year across the country and providing unrivalled access to opportunity in the international business space. Our new brand is an evolution of our past achievements and plans for the future,” said Marquardt.

“We have moved beyond the legacy American eagle, and have adopted an ‘A’ for Australia and America – along with access, referring to the access to opportunity we provide for our members. Our new look is intentionally more progressive and international, as more than half of our members are now non-American companies.”

“For more than 50 years AmCham has been helping facilitate the one trillion dollar economic partnership between Australia and the US, and we continue to be the voice of American business in Australia, as well as a voice of Australian business in the US and throughout the Asia-Pacific region

“To better fill those advocacy and information roles we are actively building the structure of our AmCham committees to cover defence and security, health, innovation, and taxation, human capital, energy and resources, and trade and government, with additional groups scheduled to launch next year. These plans are reflected in our new brand which includes four varying logos relevant to the numerous industries we connect in Australia and the US,” said Marquardt.