Seven West Media’s ongoing saga between its boss, Tim Worner, and his former mistress, Amber Harrison, has taken yet another Machiavellian twist with revelations in today’s media that Harrison is unemployed, broke and caring for a foster child.

The Australian Financial Review is reporting this new revelation and infers that SWM has been extreme in its dealings with Harrison considering the 39-year-old’s parlous state and dependancies.

According to the article, Harrison’s lawyers told SWM that she was caring for a child way back in October when she was seeking a final payout and the whole affair had not yet been made public. It’s at this time SWM cut off all contact with Harrison and her lawyers.

Harrison moved back to Melbourne to care for the child and is now unemployed and living with her parents.

As The AFR notes: “It is unclear what impact her court battle with Seven may have on Harrison’s foster care arrangement… but it certainly throws at least one of the players into a different light.”

In late February, Sydney’s The Daily Telegraph published unflattering images of Harrison under the headline: “Amber Harrison scandal: Sacked mistress broken, lonely and living off parents after Tim Worner split.” It’s been speculated by some commentators that Harrison posed for News Corp’s cameras in an attempt to win more public sympathy. 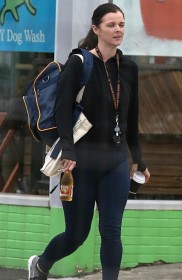 Last week, B&T reported that Harrison had already forked out $110,000 in legal fees from her battle with Seven and allegedly owes $330,000 more. This more than surpasses her payout, reportedly around the $400,000 mark.

Presently, SWM has a gag order on Harrison forbidding her speak to media or air sensitive documents she took from the company on her termination. The case returns to the Supreme Court in Sydney on Friday.