Aldi could soon be the number one supermarket in Australia, with a study suggesting the German discount grocer is poised to disrupt the Coles and Woolworths duopoly.

The findings come from the recently released Retailer Preference Index (RPI) by dunnhumby, which quizzed 1,500 Australians on their shopping habits.

It pegged grocery retailers Coles, Woolworths, Aldi, IGA and 7-Eleven against one another on factors like convenience, price and operations, along with financial performance and the emotional connection of shoppers.

The study scored each retailer with a RPI score.

Unsurprisingly Woolworths topped the list with an RPI of 95, followed by Coles and Aldi. 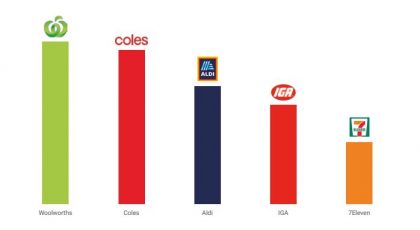 Despite finishing third, Aldi still poses a significant threat to its Australian competitors according to the report.

“By now, any reader of the RPI may have concluded that Aldi poses a bigger threat to its competitors than previously thought,” the research says.

“The fact remains that there are strategies for each of the retailers to compete on its own terms.”

Aldi has grown three times faster than its rivals over the last three, five, and ten-year intervals.

At this rate, Aldi could double its size over the next decade, which would see the German company reach a 22 per cent market share.

Corresponding loss of business for Coles and Woolworths could see Aldi at the top of the pile by 2030.

The study attributes Aldi’s rapid growth to its ‘complete shop’ formula, which sees it now “catering to all shopping missions”.

And despite marketing itself in many ways as a budget grocer the research found the typical Aldi shopper has the same average income splits as Woolworths and Coles.