Fairfax Media’s The Australian Financial Review Magazine has been named Newspaper Inserted Magazine of the Year for the second consecutive year at the 2014 Australian Magazine Awards. 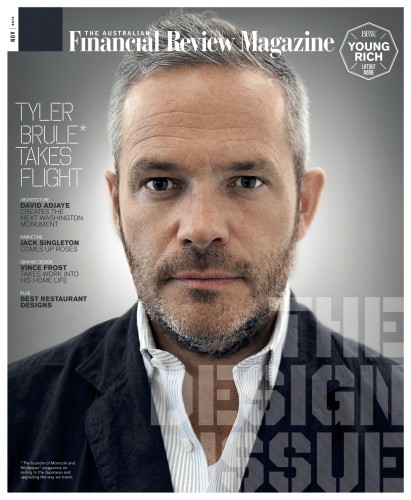 The Australian Financial Review Magazine Editor Katrina Strickland said: “This is a thrilling win, affirming that The Australian Financial Review Magazine‘s combination of style and substance is hitting the mark with both readers and advertisers. We have exciting plans for 2015 which we hope will further cement our position as a must-read on the last Friday of every month.”

The Australian Financial Review Magazine’s annual Design issue is out today, featuring an interview with Tyler Brûlé, the founder of Monocle and Wallpaper magazines, who talks about his obsession with improving the way we fly and why he’s been spending so much time in Brisbane.

The magazine also profiles David Adjaye, one of the hottest young architects in the world today. He is designing what will become the last new structure built on Washington Mall. When Adjaye visited Australia for a conference earlier this year he gave only one interview – to The Australian Financial Review Magazine. The issue is rounded out with features on adman Jack Singleton and top graphic designer Vince Frost, together with terrific pieces on the best looking restaurants and luxe homes for rent around the country.

As an added bonus this year’s issue includes an inserted magazine featuring the BRW Young Rich, a list of the 100 wealthiest Australians aged 40 or under.

I Touch Myself Project Interior Marmalade