While we’re big fans of witty newspaper cartoons, this new one is so far from the witty ballpark we’ve lost sight of it. 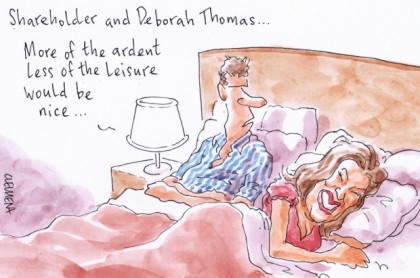 Women’s publications have been quick to criticise the artwork, saying if you wondered why there weren’t more female CEOs in Australia, you’re looking at the reason.

“There’s probably a million ways to achieve that same play on words without resorting straight to “I’ve got it! Sex with a shareholder!”, but misogynists tend to overlook such options when a woman’s involved,” Daily Life wrote.

While over on Mamamia, Georgina Dent called the cartoon “vile and sexist”, and claimed the AFR could get away with it because “no CEO of a publicly listed company, whose share price can be drastically affected by public perception, can afford to antagonise the Financial Review”.

Thomas, the former editor of Australian Women’s Weekly and Cleo, has been the head of Ardent Leisure, which owns theme park Dreamworld along with a number of health clubs, bowling alleys and marinas around the world, since March last year.

Twitter users have also shown their support for Thomas.

Gosh I wonder why there are so few female CEOs in the ASX200? Exhibit A: This cartoon. https://t.co/oGoXwxtUVb pic.twitter.com/4YVxCTt5pm

Deborah Thomas is an Amazing Woman: kind thoughtful honest – all the things this cartoon is NOT @DeborahThomas10 https://t.co/ee28mP9cb3

B&T contacted Thomas but she did not wish to comment.