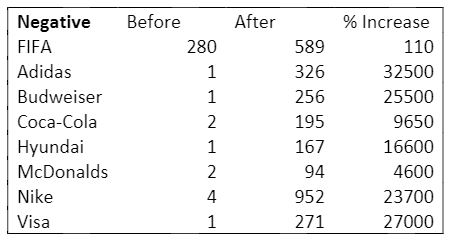 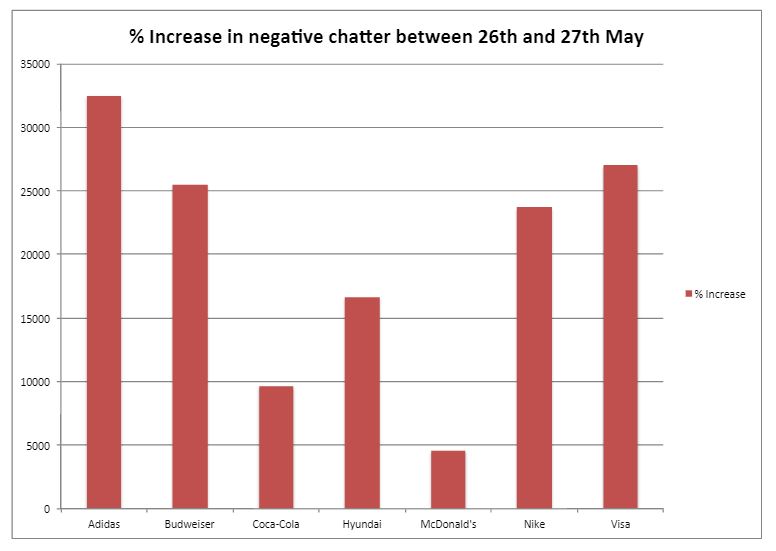 Keep in mind that Adidas would have had lower negative online comments prior to the scandal, whereas brands such as McDonalds often have higher negative perception on Twitter. This could explain why Adidas’s negative sentiment has sky rocketed.

The social backlash is pretty clear: people want big sponsors to withdraw their sponsorship of FIFA.

Until brands act – @Nike NOT @Adidas, @BurgerKing NOT @McDonalds, @MasterCard NOT @Visa, @Hyundai NOT @Kia & anything but @Budweiser | #Fifa

Brands acting like corruption in FIFA is something they were unware or not participating… Bad, bad, bad… http://t.co/JAlyVtlww5

Come on @adidas @sony @visa @coke show some leadership and tell #fifa the corruption must end. It’s tarnishing your brands too.

In other FIFA scandal news, Coca-Cola has released a statement:

“Our expectation remains that FIFA will continue to act with urgency to take concrete actions to fully address all of the issues that have been raised and win back the trust of all who love the sport of football. We believe this decision will help FIFA transform itself rapidly into a much-needed 21st century structure and institution.”

What do you think about brands sponsorship with FIFA? Tweet us @bandt