Kids are mischievous rascals aren’t they. At least that was the thought behind GMHBA’s latest ad for family insurance.

A billboard hanging from the ceiling of Geelong’s Westfield Shopping Centre food hall has got parents all shook up, with a cardboard cut-out of a young girl swinging from the bottom of it.

The advertisement reads, “Relax, GMHBA’s got your family covered,” but local father Justin Witcombe visited Westfield with his wife Samantha and four-year-old daughter Delilah, and told news.com.au it caused a bit of concern. 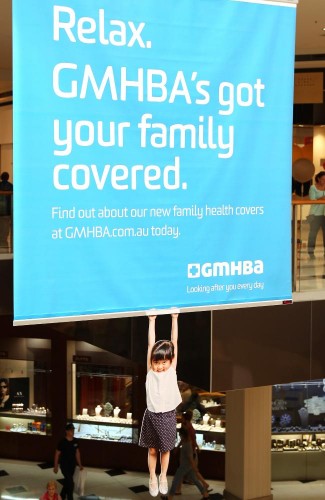 Witcombe said Delilah was disturbed by the poster, believing it was an actual kid suspended metres above the shopping centre floor.

“At first, she wanted to be up there and of course I said it was dangerous,” he said.

But Witcombe added when his daughter understood the danger of climbing that high, she became upset.

“It’s a realistic-looking photo and I noticed other people looking at it.”

A GMHBA spokeswoman said the insurance company was surprised by the reaction to the shopping centre banner.

“Our intention was simply to promote our new range of family health cover in a creative and memorable way,” the spokeswoman said.

“We are really surprised by the reaction to the banner and are now evaluating the feedback.”