The Lanhydrock National Trust in the UK has gone into damage control after it advertised a Mother’s Day afternoon tea that resulted in furious calls for a boycott.

It was Mother’s Day in the UK yesterday and to celebrate the day the National Trust advertised the special treat for mum at Lanhydrock House and Garden in Cornwall complete with “sandwiches, mini-eclairs and meringues and sconelets with Cornish clotted cream and strawberry jam”.

However, the ad featured a photo of a scone with the jam on top of the cream which, apparently, is tantamount to heresy and life imprisonment in the Tower in scone-loving Cornwall. 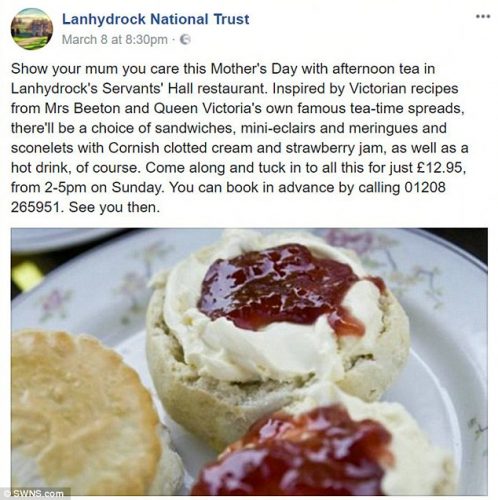 Horrified National Trustee members soon took to Facebook to vent their rage. One fumed: ‘The national trust is in a complete mess. Still letting so called trail hunts using your land and now this. It’s jam first you fools. My membership is well and truly over.”

Another angry patron wrote: “Oh god!!! Jam then cream!!!! Think my mum would disown me if I gave her this cream tea.”

Another said: “Oh my! Not often something riles me to comment but come on Lanhydrock this is unacceptable. I can let the scone (own) scone (gone) argument go at times but as a top Cornish destination you should know tis jam first! Tint right, tint proper!”

While another said: “Wow…..just wow……no one would pay for that it’s just all wrong.”

Another remarked: “Nnnooooo surly an early April fool joke… cream first what are you doing Lanhydrock….YOU ARE IN CORNWALL.”

While another woman fumed: “Oh no! I might have to cancel my National Trust membership in protest!!!”

And Lanhydrock was forced to issue an immediate apology: 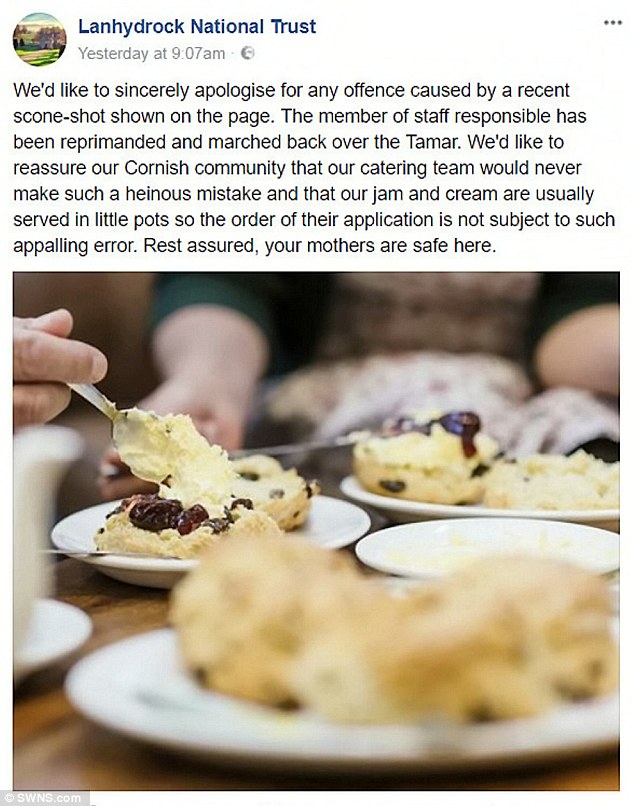 However, some people actually agreed that the cream should come first, while others berated the angry Cornish for getting so worked-up about nothing.

“What a pathetic bunch to have moaned about something so trivial. Get a life,” wrote one. While another added: “Wow.. are people really getting worked up about a picture of a scone just cause it had cream on first ** how pathetic.. like it all goes in one way and out the other anyways so who gives shit which way it is **.. grow up *”