Advertise with us
Posted 8 September, 2015


An Israeli ad blocking company Shine has taken out a full-page ad in New York’s Financial Times newspaper claiming customers are paying for ads to be displayed on mobile devices.

The ad states mobile phone users with contracts don’t realise their data allowance is being used to download ads on mobile devices.

The US trade publication AdAge, who has the screenshot below of the ad, the ad says: “Mobile ads consume 50 per cent of the data mobile subscribers pay for. Advertisers make billions in mobile advertising. Consumers should not have to subsidise their business.” 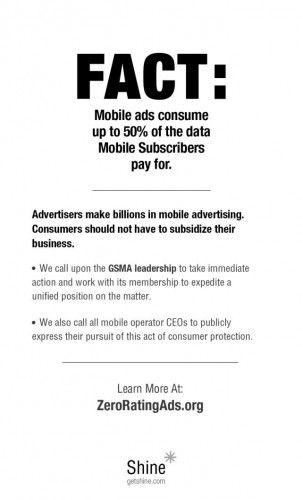 The ad calls upon mobile trade company, GSMA, based in London, to do something about it and not charge customers for the downloading of mobile ads.

The BBC points out however that Shine is not a “neutral observer” as it’s trying to sell ad blocking software to mobile users.

The GSMA told the BBC it cannot comment on the matter.

The issue of ad blocking and its impact on the advertising has roused much controversy – particularly with Apple announcing its new Safari update will support ad blocking software – as some of Adland believe it’s good for the industry and others smsmack down any beneficial suggestion.

While admitting banner ads do work, Mike Hill from digital agency Holler recently said they’re on their way out.

“You can’t make people want banner ads,” he wrote in an open letter to Randall Rothenberg, the CEO of the Interactive Advertising Bureau in America.

“This is not my opinion. You are not debating me, a foolish ad exec. You are debating the people. And we (I say ‘we’ because we should be on the same side) will lose this one.

“They’re on their way out. Not because I say they are, but because companies like Apple, Google and Firefox allow (or will soon allow) consumers to block them. Consumers will welcome this change with open arms. Not simply because banners are distracting, but also because they hamper the speed and quality of their online experience.”

And while Rothenberg conceded the industry needs to take some responsibility for creating better banner ads, he stressed it was a criminal activity and one in which legal action could be taken against the ad blocking companies.