The Australian Broadcasting Corporation’s main television channel refreshed its branding with an exuberant package that celebrates diversity and puts eclectic characters on stage, front and centre.

The brand work is underpinned by a 60 second spot edited to Australia’s unofficial anthem, ‘Throw Your Arms Around Me’ by Hunters & Collectors.

ABC Television collaborated with several creative partners to achieve the new look. It includes 20 channel idents, brand spots, a new promo graphics package and a return to the old logo form with a new colour palette, new typography and a conversation-starting tagline, #ourABC.

The channel also dropped the ‘1’ and will now be known as, simply, ABC. A sample of our promo end frames is attached.

The project was sent to tender late last year and awarded to Method Studios, who have been important creative partners in the development process. ABC Television worked with Maud to develop the brand strategy work. Audio composing house Uncanny Valley won the tender to compose tracks for the new branding elements, with the tight brief to include the iconic ABC three-chord pneumonic in the channel idents. 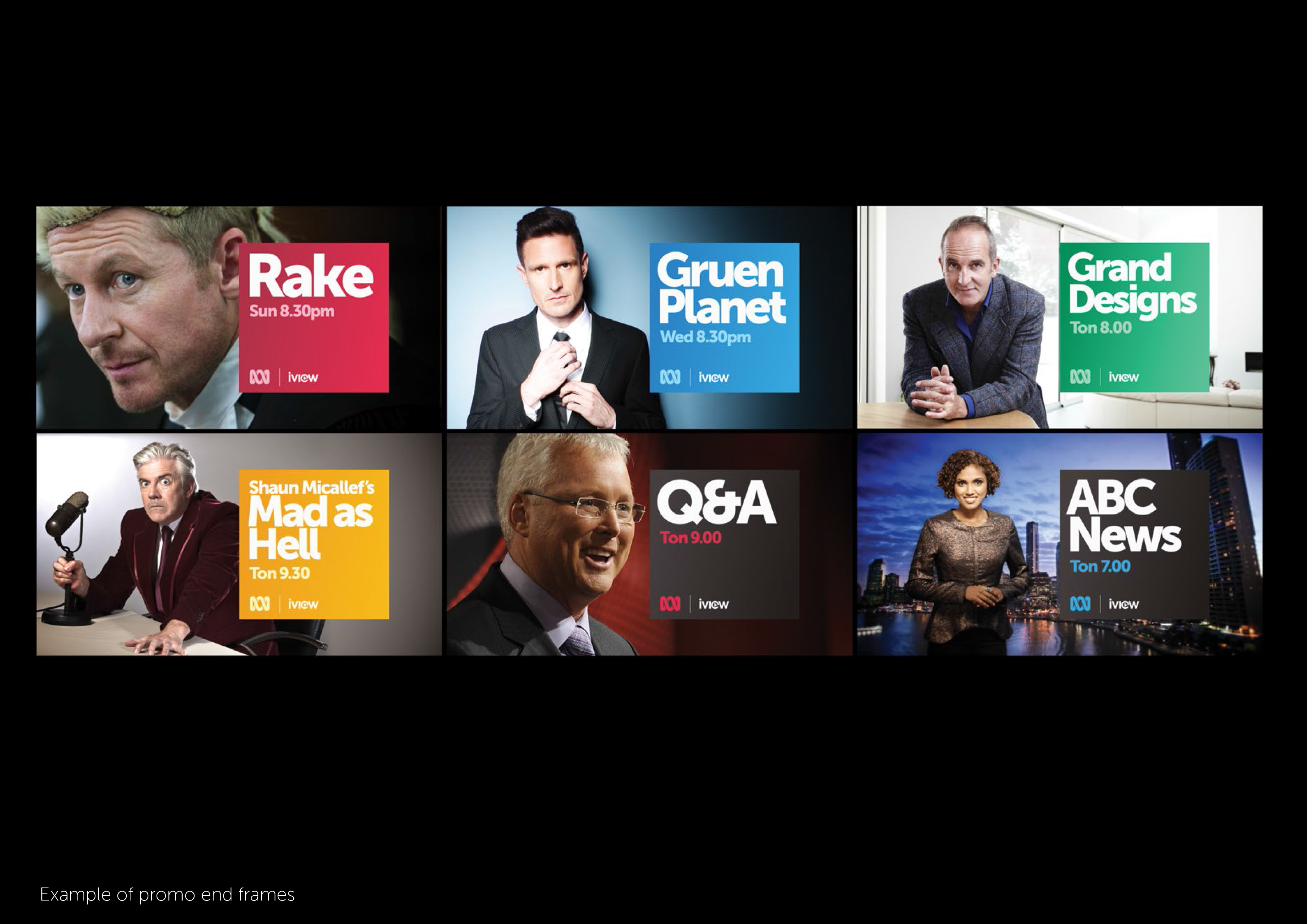 ABC Open – an ABC initiative that helps regional Australians create and publish photos, stories, videos and sound – was the first port of call. Having a regional voice in the mix was considered vital and the new branding taps into Open’s rich library of beautiful imagery and stories from communities across the country.

“It’s been an incredibly exciting project as we’ve chosen to work with quite a few creative partners, including our internal colleagues at ABC Open,” said Diana Costantini, ABC Television Head of Marketing and Communications. “Having to work with existing footage can sometimes present a sizeable creative impediment but we were able to re-craft the spots and put our own spin on them. The ABC Open stories really set the tone for the rest of the branding elements, which have been masterfully realised by Method Studios.”

Ensuring a 360° experience and brand affinity for audiences, the ABC has created an online destination where people can upload their own interesting anecdotes and images – abc.net.au/ourabc. Using a comprehensive social media marketing tool, Mass Relevance, we are able to collate and curate stories and push them back out through all our social platforms.

“Strategically and creatively we’ve tried to leave no stone unturned, working hard to be distinctive and modern in some areas while giving a nod to the goodness of the past in others,” said Diana Costantini. “For example, we’ve revisited the 80s logo design so you’ll see the ABC ‘worm’ – or Lissajous curve – in a simplified 2D form with a fresh, new colour palate. In a first, we’ve dropped the ABC typographical lockup. We know that we have one of the most recognisable logos in this country so the ‘worm’ has become the hero and we know it’ll shine on its own.”

The new look is about being inclusive, highlighting togetherness and connecting Australians. That thinking cascaded through to the creative approach with ABC Television inviting multiple people, with different disciplines, to be involved in the development process.

“We didn’t want to send the job out of house and pick up a completed package at the other end,” said Diana Costantini. “The ABC team were instrumental in creatively driving this project and influencing the outcome – working alongside our creative partners at Method and Uncanny Valley. It was such a refreshing way to work and the end result delivered the perfect package for us.”