The ABC has copped some serious flak for featuring what many have claimed as misleading footage in the latest Four Corners episode about child refugees living on Nauru.

According to The Australian, the exposé, titled “The Forgotten Children”, was found to include random video footage of adults fighting, which was previously published on YouTube by a user known as “No Rulz” (see below), as well as old photos of facilities that were no longer in use.

Comedian Dave Hughes was among the viewers who expressed his disapproval of this video footage via Twitter: 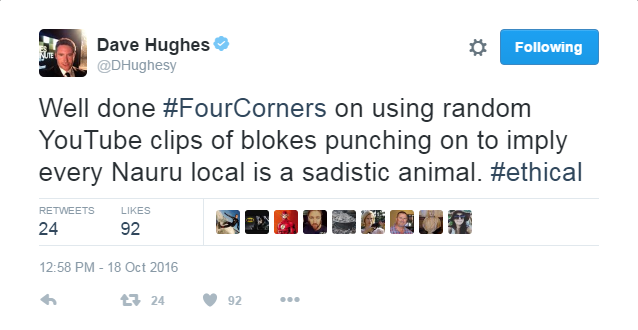 The Australian also noted a photo of an unsanitary Nauru school toilet that was used in the episode appeared on The Guardian’s website more than 18 months ago.

Immigration Minister Peter Dutton has had a go at the ABC for being irresponsible and said Four Corners had declined an offer by his office to use new photos and videos of upgraded schools, according to The Australian.

Furthermore, Prime Minister Malcolm Turnbull said on ABC Radio National that Mr Dutton’s offer to appear on the program for comment was rejected by Four Corners.

However, Four Corners executive producer Sally Neighbour wrote on Twitter that Mr Dutton was given the opportunity to respond. 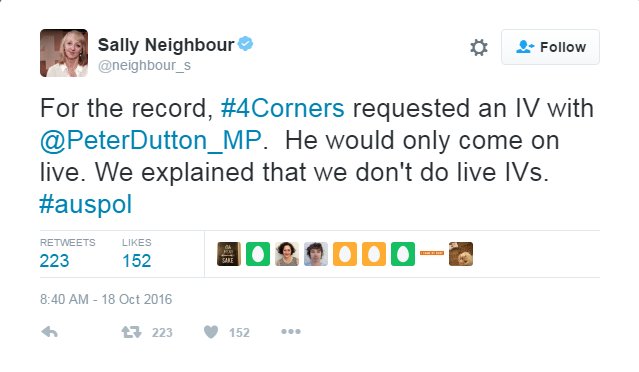 The Australian said ABC editorial director Alan Sunderland admitted the network did not film the footage that went to air on Four Corners, but said he was satisfied the vision was “appropriate”.

Mr Sunderland said that while the Four Corners report was balanced and complied with editorial policies, he conceded that he “didn’t believe” the ABC approached Nauru for comment for the story.

“I believe that’s because we felt the issues the story raised were particularly relevant to the Australian government, who of course we did approach,” he said.

Meanwhile, the Nauru government issued a very negative statement following the broadcast of the Four Corners episode, describing it as “yet another example of the ABC’s biased political propaganda and lies” and “an insult to the people of Nauru”.

“This report was an embarrassment to journalism,” the statement said. “From start to finish it was denigrating, racist, false and pure political activism.”