It’s almost a year since #twerking became part of our vernacular after Miley Cyrus and Robin Thicke re-defined ‘raunchy’ at the 2013 MTV Music Video Awards.

It was arguably the most controversial moment in music history – a lot can be said for individual re-branding when a Disney sweetheart performs not-so-Disney dance moves. That tongue, that foam finger, that flesh-coloured latex bikini and those risque moves. Cyrus’s image re-invention will forever be etched on the back of our eyelids.

For weeks and months after, all anyone could talk about was the sexed-up, depraved, tongue-wagging songstress who rose from the ashes of Hannah Montana.

So what can brands learn from Cyrus’s branding boom?

Be strategic: In his Huffington Post article, Marc Wayshak explains how Miley teaches us the importance of content and timing. “She debuted her track, Wrecking Ball, on the very same day she performed at the VMAs. Do you think that was a coincidence? Of course not. And was it a mistake that she then used her VMA performance to shock the crowd by gyrating, twerking, and dancing up on Robin Thicke? No way. That performance was carefully crafted and rehearsed over and over again. There was nothing unintentional about it at all. The result has been exactly what she wanted: more sales. Your marketing campaigns should be just as strategic and intentional.”

Be memorable: You want your campaign to resonate with an audience. Whether positive or negative, you want people to remember your brand and your campaign. Cyrus has more or less hijacked social media with her signature tongue-poking in a bid to push The Miley Movement. She tweets a number of times each day, and through her choice of language, photos and hashtags (all of which strictly relate to her re-invented self and plug her brand), Cyrus has cultivated 18.4 million followers on Twitter. In order to shake off the “good girl” tag attached to the Hannah Montana brand and compete with an onslaught of pop singers in the industry, Cyrus knew she had to do something that was so different and so provocative that she’d become ubiquitous and memorable. Sure, she can belt out a decent tune, but she knows it takes more than that to strengthen her image. Wayshak writes: “A Harvard marketing professor of mine once explained that there are three types of marketing: great marketing, terrible marketing, and everything else in between. You want to always avoid being everything else in between.“ 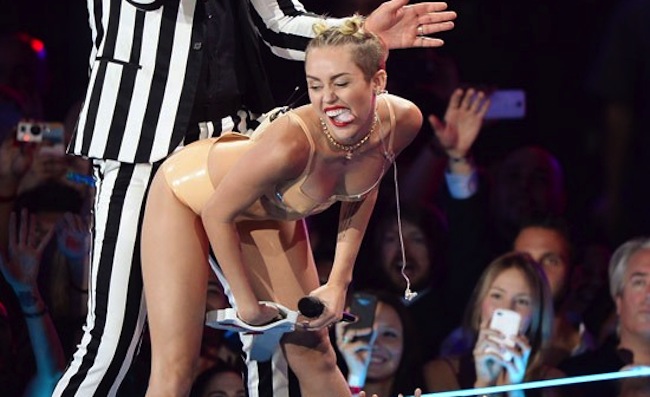 Controversy gets tongues wagging: Love her or hate her, that salacious VMA performance has kept the name ‘Miley Cyrus’ on the radar. She continued the controversy after the VMAs with the launch of Wrecking Ball. In the video she was completely nude. Within 24 hours, the video was downloaded 19 million times and the song quickly shot to Number One on the charts. But is being controversial a good thing? According to Marketing Eye‘s Mellissah Smith: “I would say that it will sell more records, more movies and definitely keep her as front page news for a long time to come. If she falls off the bandwagon like Britney Spears before her, then she may become a train wreck however, I would say that this move is more ‘brand evolution’ than a young girl off the rails. It appears too strategic, too well placed and the timing could not be better.”

Know your audience: The We Can’t Stop singer is acutely aware of who her fans are. She’s not pretending to appeal to any mums or dads out there. In re-branding herself, Cyrus chose to own her provocative image and isn’t apologetic if she cause offence. Cyrus’ target audience is the Hannah Montana audience, who are now 15-20 years of age and avid viewers of MTV and its programs. Coincidence? I think not.

Fuel them haters: Commentators on both sides berated Cyrus and some conservative bloggers labeled Cyrus ‘the devil incarnate’. The irony of any animosity towards Cyrus is that it only fuels her true fans to become advocates for her brand. Take for example this girl on Twitter – @SmilerBitchies is from France and appears to spend all her spare time re-tweeting the singer and plugging her website and latest album. Cyrus’ fans are now doing the marketing work for her and it’s fulled by speculation the singer’s lost the plot. “Many of the best marketers are willing to turn some folks off in order to create an army of hard-core fans,” writes Wayshak.

Call to action & crossing channels: Cyrus’ hit Wrecking Ball has links on YouTube which tempt viewers to pre-order her fourth studio album, Bangerz on iTunes.With the right anchor text and hyperlinks, brands invite audiences to channel-hop, which ultimately increases exposure. It’s then possible to lead audiences to some kind of “buy now” call to action. On her Instagram account, Cyrus links to her album on iTunes and takes pictures of her fan mail. Her engagement with fans on social media solidifies them as brand advocates strengthening her image and her following.