In the new world paradigm consumers want to engage with brands they trust and who they see as doing good rather than harm. Even brands that are doing ‘good’ can fail to communicate this effectively.

Hailey Cavill, social entrepreneur and communications expert, wrote the report to encourage corporate Australia to listen to what consumers want and change the way they approach and communicate Corporate Social Responsibility (CSR) and Social Good.

“We are seeing the level of consumer skepticism rise – almost fifty percent of Australian consumers think brands just spend millions of dollars on advertising telling us about CSR whilst providing no proof of this or the benefits,” she said.

“In our 20 years in business, we’ve seen a rapid evolution in the world of CSR, prompted by consumer expectation, growing awareness and a flood tide of real-time, two-way communication.

“The explosion of social media means that companies can no longer hide behind their corporate affairs departments and control what consumers think of them. The power has shifted – a reputation can be destroyed with one scandal, consumers can go from raving to ranting overnight.

“In April 2016 we put a fairly provocative statement to Australians about the way that companies and brands balance their pursuit for profit with social obligation, and asked them to agree or disagree.”

And the results speak loud and clear: 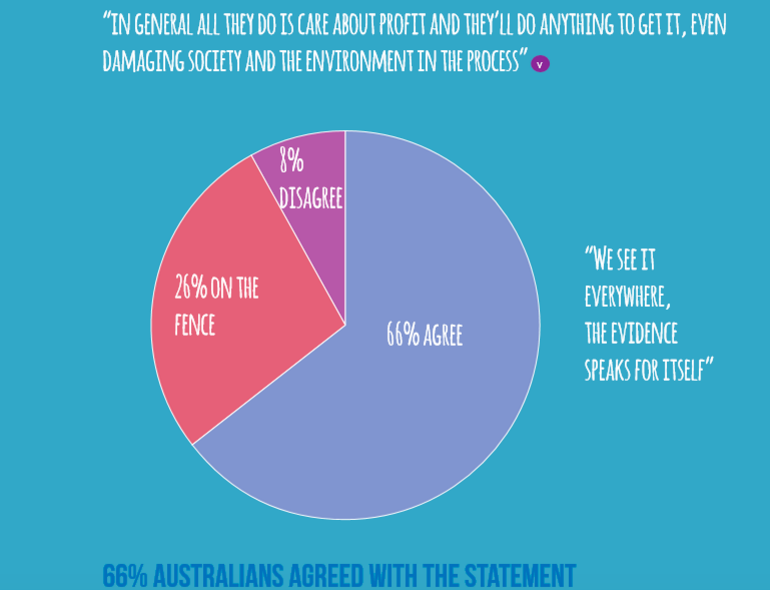 From these results, it shows that while overall Aussies are pessimistic about the issue, more than one in four are still open to being persuaded that companies can do good, and the younger generation – future consumers – appear more open to this.

The report then asked Aussie respondents what business leaders could do for them to trust them more, and the top answer was ‘share personal values’ (77 per cent) followed by ‘share obstacles they have overcome’ (63 per cent) and ‘share personal success story’ at 60 per cent.

“Products that do no harm are desired, and guilt-free brands that do good are especially popular. See the rise of social enterprises like thankyou, Hero condoms who donate a pack for every one purchased and Who Gives a Crap toilet paper that invests in WaterAid to improve sanitation in developing countries,” the report stated.

“It’s all too easy for short-termistic CEOs to halt investment in CSR because ‘it isn’t impacting the bottom line’. And let’s not fool ourselves: the bottom line is always no.1 when it comes to corporates.” 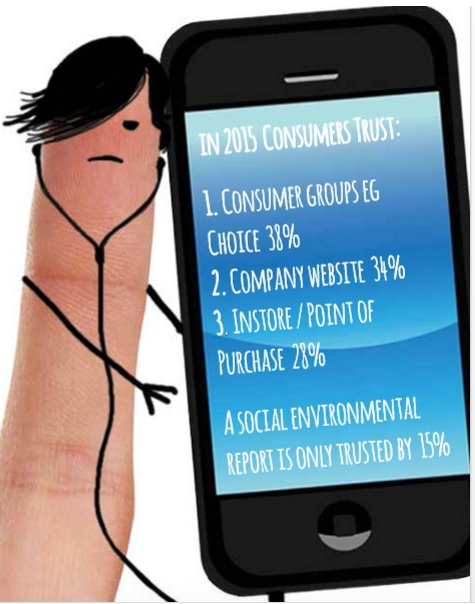 Cavill said, “We’ve pondered, analysed and cogitated for months to work out what it all means for CSR communicators. This report is the result. It’s our interpretation but it’s not just our opinion – the stats don’t lie.”

The report put the following statement to Australians and asked if they agreed or not: “In the last year I have switched from my usual product/service to another because of their support of a charity”.

Sixteen per cent said they had, which is almost one in six. The group that is switching the most is the Gen Yers, with 26 per cent of the 25-34’s switching.

In a nutshell Cavill boiled the report down to the following, giving an important lessons to businesses and marketers alike:

• Most companies fail to communicate CSR & Social Good (and all its glorious other names) so that it resonates with consumers. They are wasting a lot of time and money as well as the opportunity to differentiate, engage, inspire and motivate … all good stuff for business

• Using a universal and time-honoured story structure called The Hero’s Journey, companies can share their CSR journey – the highs and the lows, the struggles and the celebrations – with staff and consumers, who will resonate with it at a deep emotional level

• Corporates can change their role in society – going beyond just doing no wrong, to doing what’s right

Cavill concluded, “In Talking the Walk I have set out a new approach which includes telling your story, embracing imperfection, ditching the CSR report, embracing visual communication, along with ten recommendations to follow to differentiate your company or brand, earn trust, be a champion in changing society, win employee loyalty and ultimately improve the bottom line.”