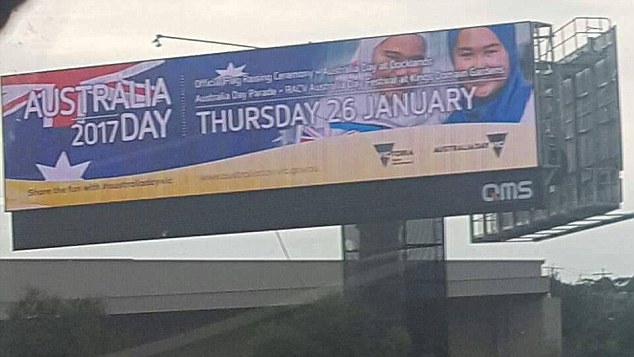 The out of home campaign appeared by a Melbourne CBD roadside late last week. However, when images of it surfaced on social media the campaign was pulled following alleged threats from right-wing groups. The threats were apparently to the OOH company that owned the billboard space QMS.

Yesterday, an infuriated Dee Madigan started a fundraising campaign to have the campaign reinstated. “This is a photo of two Australian girls celebrating Australia Day, there was no reason to take it down and it’s these same people who had it brought down that say that Muslims don’t assimilate,” Madigan told B&T.

However, it appears not everybody shares Madigan’s enthusiasm. This morning, the Sunrise program aired the views of journalist and commentator Prue MacSween and fellow guest 3AW announcerTom Elliot. Check out some of the footage that appeared on the Daily Mail’s website below.

Neither Elliot or MacSween were fans of the campaign with Elliott saying he found the hijab “medieval and repressive”.

“I cannot believe that more feminists are up in arms about this,’ Elliott said. “Young girls being forced to cover up because men were otherwise looking at them. That is medieval stuff.”

While MacSween weighed in with, “‘Let’s not bend over backwards to have this kind of propaganda rammed down our nose.”

Meanwhile, News.com.au has reported that the two children featured in the image have had to be shielded by their families following the backlash.

Mariam Veiszadeh, founder of the Islamophobia Register, told News: “The families had not expected that their photos would up on a billboard 12 months later, nor had they anticipated such a backlash.

“The girls are very conscious of what’s happening and have been following the coverage. The girls don’t understand why the billboard was removed this week. How does one explain Islamophobia to a young Australian Muslim?” Veiszadeh said.