It’s a fine line between ease and convenience and destroying the planet as Coles has quickly learned with its latest time saving offering for customers.

The grocery chain has unveiled a plastic pot of pre-chopped onions for $1.50 that not only save time but also prevent “tears” according to the marketing.

However, as these things tend to do, the product has quickly earned the ire of angry people on social media who’ve complained about the unnecessary plastic and asked, as humans, have we become so lazy we can’t even chop an onion anymore? 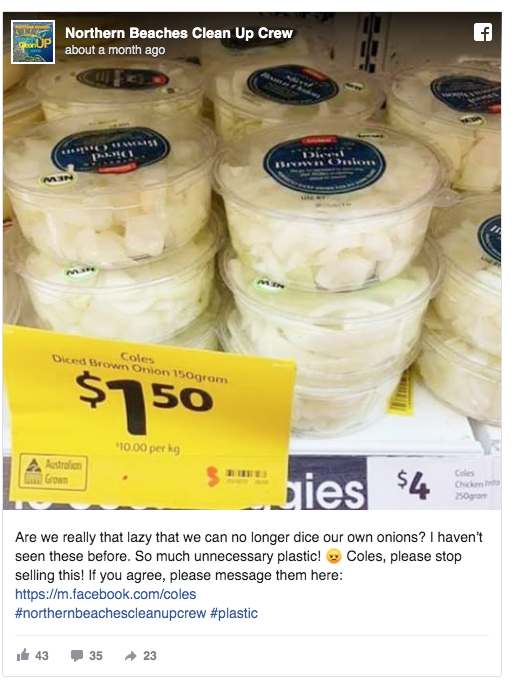 The onions were first spotted by a group called Northern Beaches Clean Up Crew’s which is apparently a Sydney-based environmentalist group.

“Are we really that lazy that we can no longer dice our own onions?” the group said alongside a a post of the item. “So much unnecessary plastic.”

And soon the comments were flooding in.

“There is an epidemic of plastic and you decide to do this,” posted one user.

“It’s so sad it’s laughable,” said another, “let them rot on the shelves.”

However, others were more supportive, suggesting the elderly or people with disabilities often struggled with knife skills in the kitchen.

“Guess you have never heard of disabilities or food cross contamination. Plastic ain’t the greatest. Showing ignorance is worse,” said one person.

“I totally understand about the plastic… however some people are unable to cut their own fruits, vegetables etc due to having disabilities,” wrote another.

Not that Coles was having any of the criticism. A spokesperson for the grocery chain telling The Daily Mail that it had long stocked pre-chopped fruits and vegetables – namely mushrooms and pumpkin – without complaint.

“We know that cutting onions is a task many of our customers do not like – it can quite literally bring them to tears,” the spokesperson said.

“So this is another example of where Coles has done the work for you.”

And on the whole added plastic thing. “All the packaging for this product can be recycled through REDcycle soft plastic recycling bins which are available at all Coles supermarkets,” they added.